SERVING MANUFACTURERS AND PRODUCERS FOR SUCCESS SINCE 1976

Consolidated sales for the fourth quarter of 2018 were $10.2 million compared to $9.7 million in the same period last year, an increase of $0.5 million or 5.3%. This was largely due to the number of projects completed during the quarter. Consolidated sales for the year ended July 31, 2018, were $42.3 million, compared to $43.0 million in the prior year, a decrease of $0.7 million or 1.6%. The decrease in sales was related to consistently lower currency exchange rates particularly in the early part of the fiscal year.

END_OF_DOCUMENT_TOKEN_TO_BE_REPLACED

Spring 2018 was a busy quarter for Reko International Group! First and foremost on our list of exciting achievements was the grand opening of our new Automation facility on June 4th. Also in the news was our team’s travels to New York City for the 2018 ATX East Automaton Technology Expo.

Reko Automation, a division of Reko International Group, will now operate out of their newly constructed 48,600 sq.ft. facility in Lakeshore, Ontario. With three 150-foot long bays, 19-foot ceilings, and up to 30 metric tonne crane capacity, Reko Automation now has the infrastructure in place to deliver large scale, turn-key automation projects and Industry 4.0 solutions.

END_OF_DOCUMENT_TOKEN_TO_BE_REPLACED

Consolidated sales for the quarter ended April 30, 2018, were $11.8 million, compared to $11.7 million in the prior year, an increase of $0.1 million or 0.7%. The increase in sales was related to increases in timing of program kickoffs in certain divisions.

END_OF_DOCUMENT_TOKEN_TO_BE_REPLACED 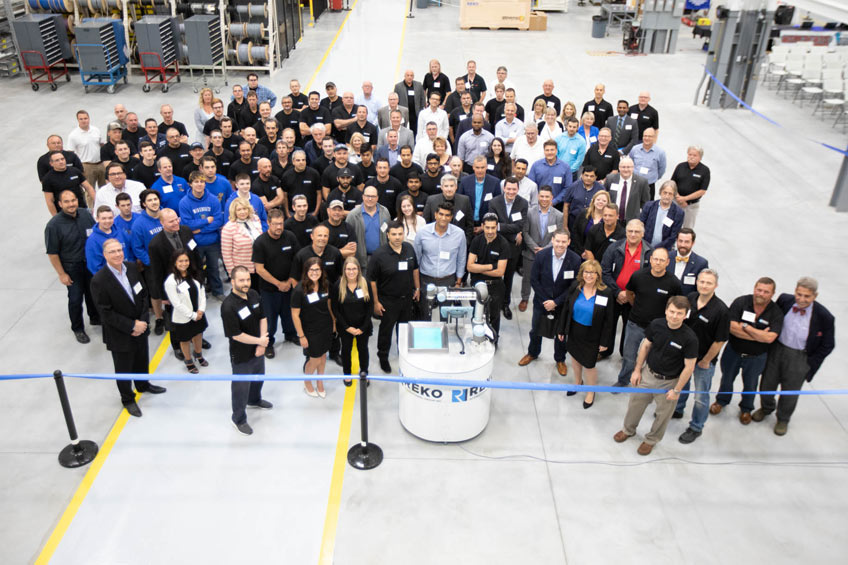 On Monday June 4th, Reko International Group held the grand opening of its new $5.7M automation and innovation facility, which will be dedicated to Industry 4.0 solutions. With three 150-foot long bays, 19-foot ceilings, and up to 30 metric tonne crane capacity, Reko Automation now has the infrastructure in place to deliver large scale, turn-key automation projects.

“We’re making automation equipment. So, things that help manufacturers be more competitive on a global scale,” said President and CEO Diane Reko, adding some of the machines are robots that can perform a variety of tasks.

END_OF_DOCUMENT_TOKEN_TO_BE_REPLACED

Consolidated sales for the quarter ended January 31, 2018, were $11.5 million, compared to $11.2 million in the prior year, an increase of $0.3 million or 2.8%. The increase in sales was related to increases in demand in both the automotive and capital equipment markets.

END_OF_DOCUMENT_TOKEN_TO_BE_REPLACED

Another year has come and gone – we are all excited for 2018! At the end of 2017, the new EDM machine for the Tooling division arrived; Reko’s new logo was introduced; the Reko Rising 455 project was well underway; and we rolled out our new website and new phone system! 2017 was a busy year, and we look forward to an even busier 2018. It is with excitement and anticipation that we look forward to all the opportunities, challenges and celebrations this year will bring!

Also in this quarter’s edition of “The Metal Cutter”

Consolidated sales for the quarter ended October 31, 2017, were $8.8 million, compared to $10.3 million in the prior year, a decrease of $1.6 million or 15.4%. The decrease in sales was related to timing of kickoffs in certain divisions as well as lower volumes in certain sectors.

END_OF_DOCUMENT_TOKEN_TO_BE_REPLACED

(Windsor, Ontario – December 5, 2017) – Reko International Group Inc. (TSX-V: REKO) is pleased to announce that Mark Read has joined Reko’s executive team as Director of the Automation Division. He is replacing Rick Stone, who is retiring after almost 29 years of service.

END_OF_DOCUMENT_TOKEN_TO_BE_REPLACED

On August 2, 2017, Reko International Group announced its plans for the construction of a new manufacturing and innovation facility. The building, which will encompass over 40,000 square feet of production space, will be adjacent to its current premises on Silver Creek Industrial Drive in Lakeshore, ON.

Management wanted to name the project, and opened it to all employees to submit suggestions for the project name, and the winner would receive $500. The response was overwhelming. It was difficult to choose just one name, but the name chosen was “Reko Rising” – submitted by Jason Poisson. It was subsequently decided to add the new address to the name, which will be 455. Thanks to everyone who submitted their suggestions, and congratulations to Jason! END_OF_DOCUMENT_TOKEN_TO_BE_REPLACED

Founded in 2014, Build a Dream is designed to attract, encourage and recruit female students to pursue careers in skilled trades, STEM (Science, Technology, Engineering and Mathematics) and law enforcement. Yesterday, Build a Dream held it’s 5th annual event at the Ciociaro Club in Windsor, Ontario inviting all young women and parents of young women to the day long event to learn about various career options, hear from established speakers and meet and greet various businesses in the Windsor-Essex area.

END_OF_DOCUMENT_TOKEN_TO_BE_REPLACED

On July 4, 2016, Reko announced that the customer related to the long term supply agreement announced in 2014, had exercised its right to make an advance payment.  This one time payment of $3.9 million increased sales, gross profit and net income in Q4 2016 by this amount and net income by $2.9 million.  There was no comparable payment in fiscal 2017, and therefore variances must be viewed in the context of this difference.

Consolidated sales for the year ended July 31, 2017, were $43.0 million, compared to $50.6 million in the prior year, a decrease of $7.6 million or 15.1%. The decrease in sales was related to the receipt of a one time payment in lieu of guaranteed volume under the long term agreement in the prior year, noted above, as well as a decrease in volumes in certain types of work in transportation and oil and gas sectors.